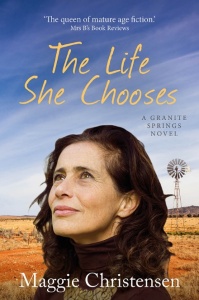 New Feature on the Blog

I’ve always included book reviews amongst my posts, but regular readers may have noticed I do fewer now than I used to. It’s not that I’m reading fewer books, it’s simply a matter of time management. This isn’t a book blog as such and I wouldn’t claim to be book blogger but that doesn’t mean I don’t want to do some reviewing and sharing in amongst all the other writing related things I blog about. So I’ve decided to try posting a monthly recommended read (or reads) throughout 2020.

I’ll only share my best reads – those that score 95% plus on the Anne Scale of Good Reads 😊 in terms of plot, character, setting and all round reading satisfaction.

And I’ll post the reviews on the last Monday of each month.

So let’s get this new feature kicked off –

The Life She Chooses by Maggie Christensen

From the back cover:

Two families. Two troubled pasts. Can they find a future together?

Following the loss of her husband and the devastating accusations surrounding his death, Kay Jackson has experienced the icy chill of alienation from the close-knit town of Granite Springs. Thrust into the position of personal assistant to a professor at the local university, Kay, who prefers to stay in the background away from the town gossips, is unsure how she will cope.

When Nick Kerr’s wife leaves him for a younger man, the professor is left nursing a broken heart while struggling to adapt to life as a single parent of two teens. Reeling from the indignity of his wife’s actions, Nick has no intention of putting himself in such a vulnerable position again.

However, as Kay and Nick’s professional relationship develops, they find themselves drawn to each other. As their friendship begins to morph into something more, Kay’s daughter arrives in town intent on controlling her mother’s life. The combined actions of Kay’s daughter and Nick’s children reinforces the many doubts the couple have on embarking on a new relationship.

Is there a future for Kay and Nick or will their families destroy any chance of happiness?

The Life She Chooses is the second book in the Granite Springs series set in a small Australian country town.

This is another most enjoyable and satisfying second-chance romance from Maggie Christensen. It tells the story of Kay and Nick – and it’s wonderful (as in all this author’s books) to read about characters who, although they’re a bit older, still want to live life to the full – including being in involved a romantic relationship.

Kay is a character who featured in this author’s earlier novel The Life She Deserves and it’s great that she now gets her own story in this book. Kay is a widow, having lost her husband to suicide – and as if that wasn’t bad enough there was a bit of a scandal surrounding her late husband too. However, Kay is doing her best to recover from all the trauma and to get on with her life.

Nick is divorced, his wife having left him for a younger man.

And when the two of them meet it seems at first there could be a chance of a relationship and some future happiness for them both.

However, there are obstacles – obstacles which seem insurmountable – as both have family issues which could prevent them being together.

There’s a real sense of conflict for both Kay and Nick – with family duty on the one hand and, on the other, the desire to live the lives they want for themselves.

The Life She Chooses is an emotional, warm and eventful story – and a most romantic read.

The book is available as a paperback and as an ebook and you can buy it here.