I regularly post book reviews here on the blog. I read a lot. I don’t believe you can be a writer without also being a reader. I read a variety of genres and I’m equally fond of non-fiction and fiction. The only category that I’m not all that keen on is literary fiction. I’m either not intelligent enough to get it – or it really is pretentious twaddle.

Anyhoo – why am I telling you all this? Because today I’m starting a new series – yes here comes another series – of posts – which will all be book reviews. The reviews will all be categorised here on the blog as  Anne’s Good Reads and any subsequent reviews that I do after this series ends will also have this phrase as a prefix to the book title. The books reported on will all be new publications i.e. brought out in the current year. And they will be drawn from all genres.

And why only ‘good reads’? Because I say so. I’ve said here before that I only review books that I can say mainly positive things about. For me life’s too short to dwell on, or write about, the negatives. I suppose you could say that I do book recommendations rather than reviews.

So let’s  begin with the first official entry on the list of  Anne’s Good Reads :

The Poison Boy by Fletcher Moss 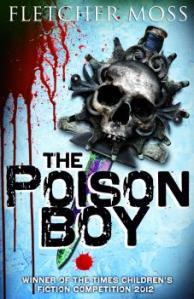 magical storytelling for all ages

Wow! What a read! It’s easy to see why this first novel from Fletcher Moss won the 2013 Times/Chicken House Children’s novel competition.

It’s a swashbuckling, sewertramping, riverswimming, mudswilling, punchflinging, pistolshooting adventure story. Set at an indeterminate time – but one that recalls aspects of the Georgian, Victorian and Edwardian eras – and in the fictional town of Highlions – a sort of smaller, darker London type city – complete with river running through, the book has crime, intrigue and plenty of surprises – as well as a bit of sweet and innocent first love.

And, hurrah, there’s not a vampire in sight!

The story is told in a succinct and uncluttered way which gives it the brisk pace that its target readership demands. The plot is essentially a quest – a quest for justice and to solve a mystery. The main character is Dalton Fly who works as a poison boy. His work involves pre-tasting the food of the rich in order to ensure it’s safe to be eaten. After his friend and fellow poison boy dies horribly having drunk some poisoned wine, Dalton is on a mission to find the poisoner. The mission is dangerous, shocking and throws up some unexpected truths for Dalton.

The characters are complete originals. Dalton is a wonderful and endearing hero who is both brave and vulnerable. His friends, acquaintances and adversaries are also well-drawn. A few deft brushstrokes and his friends including Sal Sleepwell, Scarlet Dropmore and Luke Eppington  are brought instantly to life. You only need to meet them once and you feel you know them.  Dalton’s enemies are equally vivid. The truly awful Pallis Tench is gruesome, grotesque and great!

We are led through sewers and tunnels, up chimneys and along rivers, lanes and streets. We are steeped in mud, river water and filth. We see the sights, hear the sounds and smell the smells with lifelike clarity.

The imaginative use of language is superb. I especially love the character names and the ‘swear’ words – all complete inventions.  And I suspect readers may well want to adopt ‘dreck’ and ‘kite’ as undercover curses.

The novel is aimed at 10 to 14 year-olds and would probably appeal most to the middle of that age range. But I have a feeling it could well be a ‘crossover’ book – appealing to adults and children alike.

This a stunning debut. I would love to read  Dalton Fly’s further adventures and really hope there’s a sequel planned.

The Poison Boy is published by The Chicken House and is available from bookshops and on Amazon.

I like the above quote and although I’m nowhere near saintly enough to stick to it, it’s worth aspiring to. And I do try to remember that everyone faces a bit of a struggle –  to a greater or lesser extent  – and nobody has a perfect life, no matter what kind of face they present to the world. So I try to not to waste energy feeling resentment, envy, disappointment or annoyance with my fellow travellers through daily life.

But it’s the faceless ones – commercial organisations and bureaucracies – that I find it very hard not to get worked up about and, when faced with inefficiency and indifference on their part, I’m afraid the ranting red mist descends.

Yes there’s a rant coming on. Normally Rant & Rave Tuesday is the second Tuesday of the month but I’m afraid I didn’t post last week as I was busy being a domestic goddess and taking up curtains and hanging pictures.

So this week’s blog is a combination of R&R and my normal third Tuesday content of book review and blog of the month.

The Rant – We moved house recently so we’ve been buying bits and bobs for the new place.

First problem was companies who can’t/ won’t deliver to the Scottish islands. One UK company told me that they don’t do international deliveries! That rendered me speechless – especially as our island is joined to the mainland by a toll free road bridge.

Then, two furniture items in succession arrived without the correct components for assembly. One – a home cinema system arrived with no screws. Neither manufacturer nor supplier was willing to send the missing items. My husband had to trawl the internet and managed to source a set of the necessary fixings from the USA. The other item – a stand for the TV – came with bolts that were too short to attach the TV to the stand. Again it was down to us as the customers to sort this out and find the right bolts from elsewhere.

Next – was the saga of trying to get our electricity supplier to set me up to pay online – what a palaver – days of emailing Gary in customer in customer services. He feels like one of the family now and I’m sure the poor guy has developed a twitch and the need for tranquilising medication.

It’s a sair fecht at times.

But on The Rave side – Plusnet – our broadband provider have proved efficient, communicative and reliable – and our satellite TV installer, Mario was also brilliant. And the local plumber also turned up trumps when our boiler sprung a leak. Hurrah for them.

Book Review – just a mini one this time – I’ve just finished ‘Sister’ by Rosamund Lupton (published by Piatkus and available on Amazon as paperback and ebook). 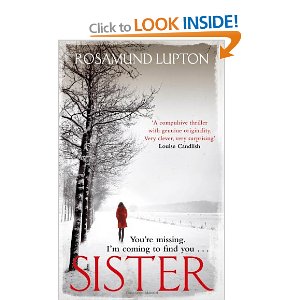 A friend lent it to me suspecting it was my sort of read. And she was right. This is a great suspenseful thriller. Beatrice goes in search of her missing sister. As she searches she finds out that there was a lot she didn’t know about her sister and Beatrice ends up in terrible danger. It’s scary, moving and will have you reading way past lights out time. My only reservation – not entirely satisfied by the ending – but I still felt it was worth it for the journey. 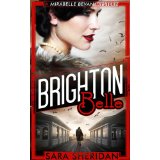 Next month I will review Sara Sheridan’s soon to be published new novel ‘Brighton Belle’ (to bepublished by Polygon in hardback in April and paperback in July) – sneak preview – it’s a good one.

Blog of the Month – Anne Mackle’s  ‘Is Anyone There?’ over at http://cassam-isanyonethere.blogspot.com I ‘met’ Anne on twitter (@cassam101). She’s a wife, mother, grandmother and Scot like me – yes we have a lot in common. I love her observations of life and her relaxed writing style. See her very moving post for Mothers’ Day – or go and read about her lottery win…

And finally – congratulations to another twitter writing buddy Mr Fletcher Moss (@FletcherMoss ). His children’s novel ‘Sleepwell and Fly’ (aka ‘The Poison Boys’) has just been announced as the winner of the 2012 Times/Chicken House Children’s Writing Competition. It will be published next year. He blogs beautifully at http://sleepwellandfly.blogspot.com  Nice one Mr M.

As I promised/threatened in an earlier post, I intend, on the third Tuesday of every month, to do a book review and also to announce my blog of the month. 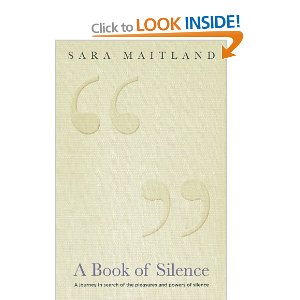 My January book is ‘A Book of Silence’ by Sara Maitland. Maitland is an author whose feminist fiction I’ve admired and enjoyed for around thirty years (her novel ‘Women Fly When men Aren’t Watching’ would be one of my desert island volumes). ‘A Book of Silence’ is difficult to categorise, but it’s not fiction. It’s part memoir/autobiography, part travelogue, part reflection on her own writing processes, but is mainly a reflection and discussion of her study of the concept of silence. Silence is something she views as a presence rather than an absence. She sees being in silence as a religious and spiritual experience and as something she longs to have more of.  I don’t completely agree with everything she says, but there’s a lot that resonates and it is beautifully and intelligently written.

I suspect this is a book for writers, especially those fascinated by the writing process. It’s also one for Maitland fans, not least because it has been a while since she published anything.

It’s not a light read. The reader needs to think, concentrate and reflect. I read it on my Kindle but  maybe the old-fashioned paper version would have been better. This is a book to dip in and out of and to flick back and forth in as you read.  It certainly gives the reader a lot to ponder.

BLOG OF THE MONTH

My blog of the month is Sleepwell and Fly written by a writer who goes by the name of Fletcher Moss. You can sample it for yourself at http://sleepwellandfly.blogspot.com Moss is a writer of young adult fiction and his book (of the same title as the blog) is on the longlist for The Times/Chicken House Children’s Fiction Competition 2012. His blog is always entertaining and often thought-provoking. There’s humour, honesty, seriousness and insight – often within the one post. It’s a great example of a writer’s blog but will appeal to non-writers who appreciate good writing. Well worth a visit.