Contemporary, literary and romantic –  women’s fiction at its best.

Displacement is the first novel in the Rachel & Jack: Skye Series

It’s never too late to fall in love, but the past can get in the way of a happy future.

From the Scottish Hebrides to the Middle-East, Displacement is an intense, contemporary love story where romance and realism, and the personal and the political, meet head on.

Divorce, the death of her soldier son and estrangement from her daughter, leave Hebridean crofter, Rachel Campbell, grief stricken, lonely and lost.

Forced retirement due to a heart condition leaves former Edinburgh policeman Jack Baxter needing to take stock and find a new direction for his life.

After the two of them meet in dramatic circumstances on a wild winter’s night on the island of Skye, a tentative friendship develops between them, despite their very different personalities. Gradually, however, their feelings for each other go beyond friendship.

But Rachel is about to go to Israel-Palestine where she plans to explore her Jewish heritage and to learn more about this contested land. And Jack is already in what is, for him, the ideal relationship – one where no commitment or fidelity is required.

Will they be able to overcome the obstacles that lie in the way of their deepening love?

Can Rachel find a way forward and let herself love again?

Can Jack trust himself not to hurt her?

For readers who enjoy mature, romantic, and thought-provoking fiction.

All my books are available on line and in bookshops. They’re available as paperbacks and as e-books. Click on the book cover images to be taken to online book store.

Settlement is the second novel in the Rachel & Jack: Skye Series

Can the past ever be put peacefully to rest?  Can love truly heal old wounds?

Settlement is the sequel to literary romance novel, Displacement, but it can be read as a stand-alone.

Falling in love is the easy bit. Happy ever after requires work, commitment and honesty.

She wants him to be her friend and lover. He wants her as his wife. Can a compromise be reached? Or are things truly over between them?

When former Edinburgh policeman Jack Baxter met crofter and author Rachel Campbell at her home on the Scottish island of Skye, they fell in love. It was a second chance at happiness for them both.

But after Jack proposes marriage, it becomes clear they want different things.

Then, as Rachel prepares to return to the Middle East to work on a peacemaking project that’s close to her heart, and as Jack’s past catches up with him, it seems their relationship is doomed.

Can Rachel compromise on her need to maintain her hard-won independence?

Can Jack survive the life-threatening situation in which he finds himself?

Will they get the chance to put things right between them?

If you like a complex, contemporary, grown-up romance with lots of raw emotion, dramatic and exotic settings, all mixed in with some international politics and laced with elements of a crime thriller, then this is the book for you.

Fulfilment is the third and final novel in the Rachel & Jack: Skye Series

When former Edinburgh police detective Jack Baxter met local author and crofter Rachel Campbell on the Scottish island of Skye, they fell in love. It was a second chance at happiness for both of them.

They both had emotional baggage. Jack helped Rachel cope with unimaginable grief after the death in combat of her soldier son, and Rachel was there for Jack after a criminal with a grudge almost ended his life. There were many bumps along the road but they believed they’d worked through and settled their differences.

However, Jack is struggling. Still suffering from post-traumatic stress, haunted by his past, and taunted by the demons of self-doubt, he feels Rachel deserves better.

Meanwhile, Rachel is busy preparing for the launch of her latest book – a book in honour of her son and aimed at promoting peace. So at first she fails to notice just how troubled Jack is.

Can Jack overcome his demons?

Can Rachel convince Jack he deserves to be loved?

Can they finally resolve their differences and fulfil their dreams together?

If you like mature, emotional and thought-provoking contemporary romance in a dramatic setting, then this is a book for you.

Change of Life is a standalone novel 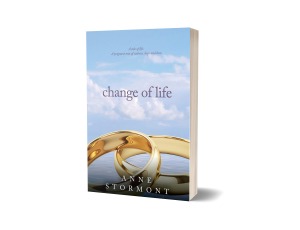 A tale of life. A poignant mix of sadness, hope and love.

Be careful what you wish for…

Wife to heart surgeon and control freak, Tom, and mother to four adolescent children, Rosie feels taken for granted as she juggles family life and her work as a teacher. She longs for a change of life.

When she hits a teenage boy with her car, her life explodes into uncharted territory. The boy is Robbie – and Rosie discovers he is part of a terrible secret that Tom has kept for seventeen years. Then Rosie is diagnosed with breast cancer.

Rosie leaves home and begins the fight for her life. Meanwhile Tom, is forced to learn what it means to be a husband and father. He struggles to keep his family together and strives to get his wife back.

The Silver Locket is my novel for children. It has been described as a sort of Outlander for children – a description I like! It’s written by my alter-ego Anne McAlpine. It’s a historical fantasy adventure and is aimed at the 9 to 12 age group. I got the idea for the book when I was still a teacher and I went with a class of Primary 6 children to the visitor centre at Culloden in Inverness in the Scottish Highlands. There me and the children got to dress up as Jacobites and Redcoats, and we re-enacted parts of this important battle on the actual battlefield. Inspiration struck. I had one of those ‘what if’ moments and I thought, ‘what if we were all suddenly transported back to the time of the real battle?’ And that was it. 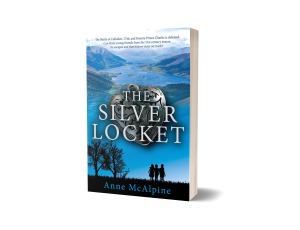 The Battle of Culloden, 1746, and Bonnie Prince Charlie is defeated. Can three young friends from the 21st century ensure he escapes and that history stays on track?

It’s the last week of the school holidays and twelve year old Caitlin Cameron is bored. But when her new childminder turns out to be the eccentric Bella Blawearie, otherwise known as Scary Lady, everything changes.

Scary Lady lives up to her name. She seems able to read Caitlin’s mind. She sees visions in a snow globe and tells the time from a patchwork clock.

And things get even weirder when Caitlin and her two best friends, Lynette and Edward, accidentally open a time portal in an old tree and are hurled back through time to the eighteenth century.

They find themselves caught up in the blood-soaked aftermath of the Jacobite defeat at the battle of Culloden, and discover they’re there for a reason. A reason Scary Lady knows all about.

But all the friends have is questions. What is the significance of the silver locket passed to Caitlin by her grandmother? Can the locket help them ensure Bonnie Prince Charlie makes the right decision about his future?

And if they fail, will Scotland’s history books rewrite themselves, meaning Caitlin and her friends will not even be born?

Join them in their 18th century adventure as they make new friends, encounter great danger and strive to carry out their mission.