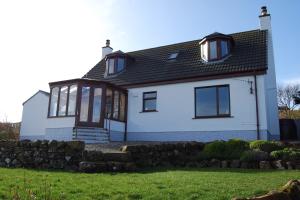 In my last post I wrote about five favourite real-life places that have featured in my books. So in this one I thought I’d share some other places that feature in my fiction but that are entirely made-up.

Now, you might be wondering why I felt the need to invent places. After all, my books are contemporary fiction and are set in real geographical locations with plenty of actual distinctive and exciting settings to choose from. Even my children’s book with its historical and fantasy elements is based in the real world settings of Edinburgh and the north of Scotland.

There are various reasons why I invented some additional settings as well as making full use of the real ones. Some were practical and some were just part of the fun of using my imagination. After all as an author I get to enjoy making up characters and their stories, so why not add in some pretend places too.

One of my favourite sorts of places to invent is a character’s home.

The house I created for Caitlin in my children’s novel The Silver Locket was based on a real house. Caitlin lives in Edinburgh with her father and her siblings in a large Victorian villa. And the house I used as a starting point was the one my piano teacher lived in – a house I visited regularly as a child. Another house familiar to me from childhood was the seaside one where one of my friends lived and this gave me a starting point for Rosie’s house in Change of Life.

For both Rachel and Jack in Displacement and its sequel Settlement I spent a fair bit of time creating their houses.

Jack’s house is a former croft house and although it’s over a hundred years old, he renovates, modernises and extends it. One of the outcomes of the work he puts in is lots of large windows that make the most of the light and the views. He also knocks down interior walls to make larger more open rooms.

Rachel’s cottage is on a working croft. It too is over a hundred years old. It’s the house she grew up in and has not had any recent modernisation work done to it.

For Jack’s house especially I trawled through magazines such as Ideal Homes and House Beautiful to get ideas. I also based some of the exteriors and interiors on actual houses including ones I’d lived in myself.

Once I had some starting point pictures in my head I then drew out the floor plans for the houses. I put in as much detail as possible – including the location of doors, windows and stairs as well as the layout of the furniture. I also made a note of the direction in which the houses faced and what could be seen from the windows. And these plans were important – not because I intended to include every detail of these dwellings in their respective novels – but in order to maintain clarity for myself when I imagined my characters moving around in these spaces. But not only that, it was also in order to maintain consistency for my readers who I hoped would be able to imagine these spaces for themselves.

Almost all the outdoor settings I’ve used so far in my novels are real. The walks taken by the characters, the towns and cities and villages they live in exist – even if their actual address doesn’t.

But I did make up one place and that is Halladale the crofting township where Displacement‘s (and its follow-up books) Jack and Rachel live on the real Isle of Skye. I located Halladale on the (real) Waternish peninsula at the northern end of the island but I decided to go for a made up community. The reason I did so was to give me freedom to lay it out as I chose to for the purposes of the story – and also so that nobody in the relatively small island community could possibly mistake it for their township or their house.

However, having opted for this made-up location meant that once again I had to some detailed drawing to do. After all I couldn’t have a character’s house facing the loch on one page and then have it turning through 180 degrees to face the hill a few pages later. So the whole township was committed to paper and stuck up on the wall.

I have to say I thoroughly enjoyed making up all those places. The houses in particular were great fun to do.

And that’s part of the joy of being a writer – having the freedom to just make things up – people, stories and places.

If you’re a writer do you use real locations in your writing? As a reader do you prefer real world settings or made-up ones – or a bit of a mixture?

5 thoughts on “Writing Fiction: Made Up Places”