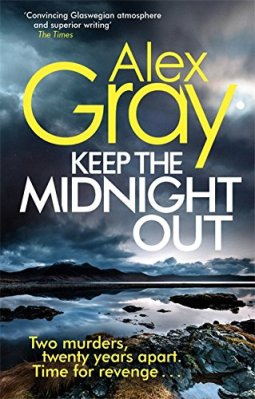 Regular readers of the blog will know I’m a big fan of crime fiction and especially of Scottish crime fiction, so I was surprised not to have discovered this author until relatively recently. Now that I have, I’m glad to have done so.

The story is set both in Glasgow and on the Scottish island of Mull. The crime that is central to the story is a murder and the body of the victim is washed up on Mull. The body is discovered by Glasgow cop, Detective Superintendent William Lorimer who is holidaying on the island with his wife.

There are two brilliantly handled interwoven plots and the story is well-paced. There are the requisite red-herrings, an exciting climax and a satisfying ending.

The descriptions of the settings, especially of Mull, are both realistic and vivid.

But for me it was the characters that stole the show. The author renders them all as three dimensional, living, breathing people and so as a reader you care about them and their fate. Detective Lorimer and his wife are particularly well done. Theirs is a loving marriage and their backstory is poignant and relevant.

And the supporting cast including the suspects, the pathologist, the island police officers, and the investigating officer from the mainland, are also very well done, as are the relationships between them all.

Gray is an experienced writer and it shows. I can’t wait to read her next one.

Type of read: Good holiday read, especially if you’re in Scotland and it’s raining. Just curl up indoors, tea and shortbread to hand and enjoy.

When the body of a red-haired young man is washed up on the shore of the beautiful Isle of Mull, Detective Superintendent Lorimer’s tranquil holiday away from the gritty streets of Glasgow is rudely interrupted. The body has been bound with twine in a ghoulishly unnatural position and strongly reminds Lorimer of another murder: a twenty year old Glasgow case that he failed to solve as a newly fledged detective constable and which has haunted him ever since.

As local cop DI Stevie Crozier takes charge of the island murder investigation, Lorimer tries to avoid stepping on her toes. But as the similarities between the young man’s death and his cold case grow more obvious, Lorimer realises that there could be a serial killer on the loose after all these years.

As the action switches dramatically between the Mull murder and the Glasgow cold case twenty years earlier, Lorimer tries desperately to catch a cold-hearted killer. Has someone got away with murder for decades?

Keep the Midnight Out is published by Sphere and is available as a paperback and as an e-book.

One thought on “Book Review: Keep the Midnight Out by Alex Gray”