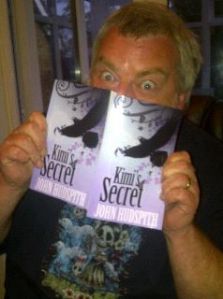 I’m very happy to announce the publication of a new children’s novel by my friend and book editor John Hudspith. ‘Kimi’s Secret is John’s first novel and it’s a wonderful book. It will appeal to children at the upper primary school stages as well as to any adults who enjoy adventure, fantasy, originality, excitement and a healthy measure of grossness in their reading. This a literate, well-researched and  intricate tale but more than that it’s an engaging page-turner.

I feel a special connection to this book because me and some of my pupils were very much involved in the later stages of its development. You can read below how this came about and what the project involved. John and I collaborated on this account and it originally appeared on http://jjmarsh.wordpress.com

Anne Stormont: I am a Support for Learning teacher in a primary school. In early 2009 I was
asked to work with a group of eight eleven-year-olds in order to extend their
writing skills. This was a group of able and discerning readers, whom, their
teachers felt, had lost enthusiasm and motivation in their writing and who
seemed to be underachieving. I was charged with turning this state of affairs
round. Simple!

I set various types of writing exercises in order to
stimulate the children’s creativity – providing story starters, playing games
that generated ideas and using extracts from various children’s novels. This
worked to a certain extent but I still didn’t feel I was getting their best
work.

By chance, I was, at that time, reading an early draft of
the opening chapters of John Hudspith’s children’s novel, ‘Kimi’s Secret’. I
thought it was brilliant – great story-telling, original and engaging. But I
wondered what the target audience would make of it. So I read a couple of
chapters to my group of somewhat reluctant writers. Their responses were
amazing. They liked the characters and the story and they wanted more, but they
also had suggestions and ideas of their own about the text.

And that was the start. I asked Johnny if he would like to
be our ‘virtual writer-in-residence’ for a term and to engage with the children
on a writing project. I would read the book to the children and they would
respond chapter by chapter with critiques, suggestions and comments. In return
Johnny would set Kimi related writing tasks for the children to complete and
submit to him for feedback. I also asked the children if they would be up for
it.

John Hudspith: How could I not? What an opportunity to
experience something quite wonderful – direct contact and interaction with my
intended readership – I will admit to feeling a bit wobbly at the prospect,
knowing fine well that if my story was not up to scratch then I would be told
in no uncertain terms and that the drawing board would surely beckon. I dived
in headfirst and with fingers crossed.

Anne: Both Johnny and the children took up the challenge. Everything was done by email to and
from me. Johnny sent me the chapters as they became ready. And during two, hour
long sessions per week, the children listened to the story, sketched and wrote
their responses, filmed their round table discussions and debates, wrote Kimi
inspired stories of their own and carried out detailed reviews of characters
and plot. Film clips, writing, photos of detailed sketches, commentaries – all
were emailed by me to Johnny and he emailed his (personalised to each child
contributor) responses back.

John: Seeing my story, characters, plot line, pulled apart and jigged about and questioned in a manner which perhaps only
children can be proficient at, brought me great wonders. Listening to their
interpretations opened up new areas of story. Studying their observations on
what worked, what did not, and what could be expounded, was an enlightening experience.

Anne: The project was one of the highlights of my thirty-plus years in teaching. The children and
I looked forward to our Kimi afternoons and the productivity achieved was astounding.
I loved seeing the children drawing as I read. Most of them did this – some
drawing a character – others sketching out a scene. The quality of the debate
about the effectiveness of a chapter, a character, a plotline was excellent and
they didn’t pull their punches if they detected any shortcomings. This, of
course, fed into their own writing which they approached with a new awareness
of the tricks of the trade, of techniques and of the reader’s experience.

John: One thing that became apparent as the process went on was the children’s thirst, not just for good `story` but a
hunger to learn. They loved to question unknown words like `discombobulated` which
they would go on to use in their own writing. Receiving an email from the
mother of one pupil thanking me for making her boy so enthusiastic about his
work brought a rise to my chest I will never forget, as will witnessing the
squirming faces, icky gagging, and hollers of laughter as Kimi’s Secret was
read out loud.

Anne: One boy sought advice about how to be original – he felt that when he wrote, he
imitated whoever his current favourite author was. His concern meant he felt
that writing anything was pointless as he was ‘just copying’. But, after Johnny
assured him that this was a common fear amongst writers, and that it was all
right to model yourself on a writing hero as long as you put your own slant and
ideas into the mix, the lad had the confidence to just go for it.

John: Engaging with each pupil and critiquing his work opened up a whole new world for me. I took great care of course, knowing
that my input could be persuasive towards their relationship with words, not
just now but in the future, but the responses to my recommendations and
suggestions were always highly positive. It is this `joy` of teaching of which
I certainly envy Anne for.

Anne: Another child came up with a detailed map of the land of Heart – spending a lot of time
meticulously checking the facts and then planning out their own
fictional landscape on which to base an extended piece of fiction writing.

John: Yes, one of the greatest satisfactions was
receiving pictures in the mail; each pupil drawing their own interpretations of
various characters or their ideas for new scenes which would invariably include
some of the more yucky elements of Kimi’s Secret. One drawing in particular
remains stamped on my retina. And that is one boy’s interpretation of Heart and
how it might look if viewed from the basket of a hot air balloon. When my
brother saw this picture he presumed I had sent the pupils pictures of my
original storyboards because my original `sketch` married this pupil’s `sketch`
almost identically. His interpretation, `built` merely from the written words
in the story, was spot on. I am a great believer in the power of writer to
reader connection achieved by word imagery – that psychic connection – and to
see it at work like this brought a great sense of achievement along with a grin
the size of Scotland.

Anne: The group also came up with suggestions for sequel plotlines and new characters for
further instalments.

The children wrote alternative scene/chapter endings and
also developed their own original pieces of writing in response to Johnny’s
suggestions. The level of eagerness to hear what Johnny’s response to their
offerings had been was incredibly high. They really wanted to please this
‘proper’ author – his credibility being much higher than a mere teacher’s.

The children also got the added bonus of taking part in a
competition set by Johnny. He gave them a scenario and a couple of suggestions
and tips – and they were off. They worked on their entries both in school and
in their own time (willingly) and were very excited as they awaited the
results. The first prize winner received a book token.

John: Judging the competition was yet another highlight. To observe these young writers at work, unbridled of rules, stuffed
with ambition and incredible imagination, was an absolute pleasure.

The whole process; the reading, critiquing, the questioning, the ideas, the drawings, the writing
competition – opened my story-telling mind directly to what my reader wanted.
It taught me not to dumb it down, not to hold back, that my readers wanted to
be challenged. These readers were hungry and it was my job to feed them. For
that insight alone the process was worth it.

Anne: We rounded off the project with a Kimi-themed party – Heart-shaped cakes and ‘Kimi’s
Secret’ placemats – and party-poppers and sweets courtesy of Johnny.

I was invited by the education department for whom I work to
share the experience of the project at a showcase of best practice in teaching
and learning. This was something I also enjoyed in spite of nerves about public
speaking.

The children are now at high school, but are thrilled that
the book is about to be published and can’t wait to get their hands on their
own copy. They are rightly proud of their involvement in this wonderful work
and so am I.

John: With a precision that one’s peers might not
be able to achieve, these pupils brought their unadorned demands and slammed
them on my desk. This is what we want, and this is how we want it. And so it
was. Such directness, face to face with your reader, is priceless. If you’re
writing for children, find yourself a willing (and hardworking) teacher and get
connected. Thank you, Anne and those apt pupils, for making Kimi’s Secret what
it is.

In the meantime if you can’t wait for the paperback to be available on Amazon contact the publishers at http;//www.feedaread.com and they’ll send you one.